Riding into the Sunrise

It is almost fall here in Iowa. Already leaves on the trees are changing color. For me it seems a bit early, but the nicer cooler temps and excessive rainfall is really causing Mother Nature to change seasons a bit early. Even the cornfields are turning brown. So to is my seasonal clock amiss. This year has been one for the books. 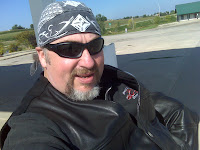 Work has kept me busy, tormenting me with the doldrums of working a regular day job with the neverending toiling of my contract work. Riding time on my Harley has really been sliced to a minimum. Riding when I can to work and back some days has been about all I can fit in, but I have managed to find some time to spend more than a few hours on the scooter. Sometimes I have to be forced from my desk as those dreaded timelines tend to keep me posted at my workstation for hours on end without a break. And then there are times when my mood and my temperament finally drive my family to point and escort me to my awaiting steed, almost as if I had committed some wrong for which my pennance must be ridden off. Well, if I must!
As the fall season approaches the sun seems to rise later and later in the morning. Waking up in the darkness of early morning can tend to be a little worrisome, but eventually the sun takes its place in the sky for the day. As an amatuer astronomer and stargazer, there is always something in our sky to observe and keep us company. The moon too, takes its path across our skies reminding us of such things as harvest time, and monthly change. Lately Jupiter has taken its place in our skies providing wonderful planetary views. If you ever want to see true beauty - look up!
A few weeks ago I had an urging to take another extended ride to - well somewhere. Spend a day just getting away to some nearby city or town escaping the barren scenery of Iowa. One such town I wanted to visit was Madison, Wisconsin. My wife had been there once for a few days of some sort of company training a few years ago, and she was visibly impressed with the inveritable treasure trove of scenic beauty, commerical progress, and friendly atmosphere. I spent a couple days going over various routes, mentally noting various roadmarks for reference on my trip. Initially I had planned to ride just to Madison, but after some careful planning with my wife, opted for a much longer route from Madison to La Crosse. In reviewing the maps of Wisconsin I noted Highway 35 ran directly on the east shoreline of the Mississippi River - which might prove to be an awesome return ride when the fall colors were in full bloom.
I took off the Friday before Labor Day weekend to accomodate my riding activities. The route I 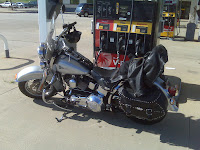 chose was mapped at slightly over 500 miles which would take most of not all day on the bike assuming I didnt have any misfortune. The prior weekend I spent an hour changing all the fluids on my Harley. I wanted to make sure there were not going to be ANY problems, so when I dressed in my leathers that morning I was ready. I had packed my road atlas and my GPS receiver, in part because I knew I was going to a strange town, and it would not take much for me to get lost. That statement would later prove to be all too prophetic.
As I turned onto Highway 151 and headed towards Madison, I noted a number of foggy areas which filtered out the rays of sun leaving just a small orange orb left hanging in the sky by the angels. Some may not believe in angels, but I like to believe angels are everywhere. And was it 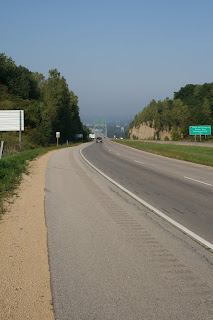 ever a view! Occassionally I would ride above the fog layer revealing the full sunshine, and then sink back below leaving the sun drooping in our sky. I was riding into the sunrise, and as I reached Dubuque, a local town on the Mississippi River, the fog was became more dense above town, but as I descended into town, suddenly the clouds opened and the bright sun shone its warmth on my face. I knew it would be a gorgeous day after that!
The ride across to Madison proved to be fairly uneventful. I stopped once for gas in a small town just southwest of Madison, filling up on gas and a small bottle of cranberry juice. My energy level was down a bit and manhandling that bike bike for three hours had left me a bit low on energy. After contacting my wife briefly by text message of my whereabouts, I got back onto the road and made my way into Madison. the trip itself took me not quite 3 hours, and I was ready to get into Madison.
One thing my wife and I love is our sweatshirts, and this particular trip I tasked myself with finding the University of Wisconsin campus for a sweatshirt. It looked easy enough on the map. Right?? As I rode towards my exit, I was forced to make a hasty lane change, making me miss my turn. After several foul spats at the offending driver, I pulled off and headed back to my exit. At this point I was more frustrated with the bad driving and the excessive cell phone use. Nothing irritates a motorcyclist more than someone driving while talking to someone on their cell phone. I took my turnoff, got into the inside lane, and proceeded to - - - get lost. It wasnt all that hard to do. After ending up in the wrong lane, I took one wrong turn, and violay! After a couple of miles I realized I wasnt where I should be, and pulled up next to a beautiful park area, which smelled wondrously of flowers, although I wasnt sure what variety. Nevermind the flowers, though. Where was I??
As it turned out, my prayers for finding my way were soon answered! I had often heard of the generosity of a fellow Harley rider, and on this occassion I truly believe the angels sent this man to my rescue, for as I was pulling out my map and my GPS unit, a friendly neighborhood biker pulled up and said "You are lost aren't you" almost as if he had been sent to rescue me. After I told him my plight, and where I was headed, he said "Why dont you follow me - I will get you there". And with that we set off, and after about 10 minutes I got to my destination. I never got to thank this man at least with lunch or a handshake. Instead, he told me to ride safe, have a great time, and then left. I never got his name, but somehow I feel he was there for a purpose.
I spent the next 90 minutes getting to the Campus Bookstore for those beloved sweatshirts. I was still in most of my riding gear, and I kinda stuck out, but I finally made it to the store. I 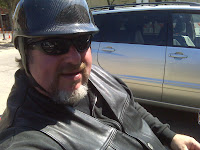 searched the displays and found what I came for. On the way back to my bike, I walked by a park area where you could see one of the lakes that Madison is surrounded by. A sailboat had perched itself near the beach, and the water was filled with boats of all kinds. It was a beatiful scene, and I wished I had planned more time there, but I still had places to go, so I kept hiking. One particular lady caught my eye and smiled as if she had been watching my tourist like behavior. A friendly face smiling and a helping hand. All in two hours. Madison had made a good first impression, so I will plan on a return visit later.
Once I packed my wares onto the bike, I quickly made my way back out of town to the Interstate. I gassed up and headed northwesterly to La Crosse. The two hour trip was mostly uneventful, but because of the holiday the road was rather filled with traffic, so I was keeping 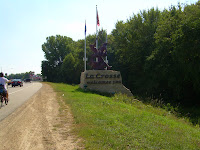 extra distance between myself and traffic. It had become a bit warmer and my leather jacket was in my saddlebag. Not exactly the smartest thing but my best decision making is done when I am a bit cooler. As I pulled into La Crosse, I noted I was running a bit behind. Friday night is my bowling night and it was at least another 3 hours back home. I hurriedly gassed the bike, and made a quick stop for a cheeseburger. I needed some energy and hadnt really eaten all day. Note to self. Next trip pack your own lunch.
Now I was headed south along the Mighty Mississippi. There are literally a ton of historical markers, sites, bars, and scenic viewpoints along the river. there are also a number of Lock and Dam structures controlling river flow and barge traffic on the river. It was here I pulled out my little hand held 4 MP camera and started taking some pictures. I had purchased a clamp mount for my camera, but because I was running behind 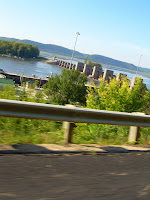 chose not to use it and snap pictures by hand. I snapped several pictures testing different hand positions and shutter settings. Taking images like this can be rewarding and it can be trying, but the biggest issue is having to snap pictures with one hand while driving a motorcycle with the other. After snapping about 40 frames I put the camera back in my vest. Safety should come first, and this is an exercise I do not recommend.
I crossed back into Iowa at Prairie Du Chien. The river is narrow here, and the bridge is a smaller one. I pulled over once to put some eyedrops, and again to contact my wife to meet me with my bowling equipment. The views up in that area are just tremendous, and should be even better when the fall colors come out. The highway back home was a winding road, hilly, and swervy - just right for a motorcycle! Passing thru Strawberry Point, Manchester, Ryan, and on past Coggon turning home, I noted the orange glow of sunset. It had been a wonderful relaxing day. I felt almost as if I had a copilot with me watching me and guarding me. 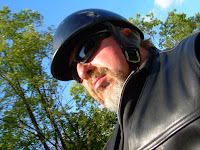 A few days later I had gotten up and checked my cell phone messages. I noted that there was a short notice ride for the Patriot Guard Riders, a national organization whose purpose is to welcome soldiers home from active duty or funerals, using a flag line for support. This day would be a Welcome Home for a local soldier who had spent two years at Walter Reed Hospital getting his legs repaired from injuries sustained in a gunfight in Afghanistan. This is indeed a worthy cause to me, and since I don't often get the chance to attend these rides, today I would make an exception. I informed my wife of my plan, kissed her for the day and headed to work. As I made my way on my bike around town to my office, I noticed the horizon. 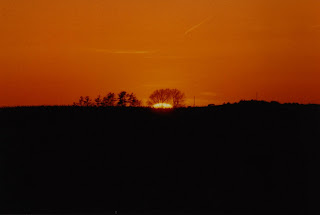 Once again I was riding into the sunrise.
Posted by boomer64 at 5:28 PM No comments: