The Price of Motion

Its supposed to be spring around these here parts, but you could have fooled me!  I was out on the bike two weeks ago and temps were trying to dip below freezing for the 6th straight day.  Legs get just a mite COLD when it does that.  Its supposed to be spring - the morel mushroom season - - wasn't!  Spring temps were so cold that forecasters are predicting no mushrooms.  DRATS!  I love those little things too.  Another sign - dandelions are coming out in droves! My yard is currently covered, and I have yet to mow for the first time this year.  I keep hoping another chilling frost will kill the grass, and even my neighbors are beginning to wonder if I am even alive.  Sorry - I hate mowing.  Maybe its that I had to mow growing up, or maybe its my knees.  I don't know perhaps I am just being obstinate? Yes folks its spring, and suddenly my hunny-do list is growing faster than I can keep up.
Riding has been hit and miss.  My trip to Chicago on the bike was great, but other riding activities are being suppressed a bit.  Lots of reasons why, but the hard part is I can't ride as much right now, and boy does it EVER pain me to say that.  I did take some time to test ride a 2011 HD Street Glide, and wow what a machine!  It has the larger 103 cubic inch engine, and when you hit the throttle you know you are going somewhere.  It had been my hope to move up to a bigger bike.  The advantages are fairly plain.  My larger size, a bit more reliability, and a new bike comes with a warranty.  The last couple of weeks I am beginning to hear a slight lifter noise from Melissa.  To me that's a sure sign of trouble, but both mechanics I have spoken to tell me its nothing.  Usually when you hear a metallic tapping in an engine, well, maybe its time to take it in to see what that issue might be.  Unfortunately as circumstances are, with Mary missing so much work, my down payment has been used up on medical bills. So for now, I will have to stay with my Heritage Softail.
Thats going to be a challenge, though.  Anybody priced a road trip to - say a local gas station?  And they call a second mortgage insanity!  I have watched the price of petrol climb faster than a Navy F-18.  And when will the lunacy stop? I watched a part of a congressional hearing about that very issue, and those CEO's keep playing dumb while raking in record profits.  Someone tell me again why?  I have hear one theory is speculators are driving up the price, while others blame the oil companies, and still others blame OPEC.  I blame all of us.  We all need gas, but why speculators are even in the equation is bizarre, and those pesky CEO's are just too darn greedy to really care, which leaves us OPEC, who claims to not know a darn thing about oil prices.  Then there are folks like us dumb Americans whose thirst for gasoline is rivalled only by their thirst for beer.  And - the price of gas is sure to drive up consumer costs, pushing down spending, and further causing global economic peril.  Stop me when you need a couple aspirin because this whole affair is making my head hurt.
As for our home front Mary is not doing well.  Her back, inexplicably, has suffered some sort of setback.  She was back at work for two weeks, when she started having that same pain.  XRays, CT scans, and MRI's were all ordered.  The neurosurgeon believes one of the braces has slipped just enough to cause pressure on one of the nerves again.  She was doing so well, too, but now we may be facing a second surgery.  For now she will take the next three months off, recuperate, and see how her back continues to heal (or not!) and if she continues her current pain level, the doctor may have to operate again to reposition the braces.  Hopefully this is a minor setback, but I am not quite as "hopeful" as others might be.  Every time I "hope" for anything, I get sorely disappointed.  Its a real problem for her too, because she can't be as "active" as he would like, and at a time when we would like to think about doing a little travelling from time to time that's maybe not so good.  I even suggested she try some acupuncture, but she offered a solution that's probably not physically possible!
And speaking of moving forward - we went to a wedding yesterday. Mike and Jessica finally got hitched.  Mike is a young man I have watched grow up since he was a fourth grader being a real pain in the asterisk to our daughter Jesse (no not the same as the bride!) and has been a great help to Mary and I, been a super friend to Jesse, and just about the most positive person around.  He has been a blessing to everyone he meets, and I will hope and pray that he and Jessica have a wondrous and prosperous life together!  They are a great couple, and I am hopeful they can be a great influence in our community.  Congratulations Mike & Jessica!
Perhaps I should have taken up golf!
Peace & Love!

Where Eagles Dared To Fly

Ahhhhh by now we have all, or at least I HOPE we all, have heard the news of the death of Osama Bin Laden.  We heard the news last night when my cell phone lit up with an email alert about it last night about 10 PM.  I think I stopped breathing for a few seconds and then sucked in about 8 gulps of air.  I even had to pinch myself a few times before turning the news on tv to find out my cell phone was NOT lying to me, indeed, it had told the truth.  I sat in bed almost stunned - maybe even a bit numb from it all. A man our country has sought for so very long had finally been brought to justice by, of all things, a Navy SEAL team.  After serving four years in the navy myself, I can honestly say I was just a wee bit proud of that team and the navy.
I thought about these events today.  I think I feel just as stunned as we all did on 9/11, but let me take this a step further.  So far our country alone has sacrificed almost 6000 men and women, and suffered almost 45,000 wounded casualties in the nearly ten years since 9/11.  While those numbers are nowhere near the casualty rate of wars like Vietnam, the fact remains that we have paid a high cost for the life of just a select few who chose to rule as dictators in lands we simply have no real understanding of.  As I watched the events unfold last night I recalled the numbers of people killed at the World Trade Center, the Pentagon, Flight 93 in Pennsylvania - alas even the number of those killed in Spain and London exacted a heavy toll, and yet thru all of this I felt a sort of disbelief that after the enormous loss of life literally exacted by this one man, he had finally been found - and served justice at the hands of OUR military.
﻿
﻿

I have watched and supported our military since I left the service in 1986.  I have watched young men and women come home, literally some right out of high school, killed in action or wounded in battle.  Babies really.  Young men who couldn't possibly fathom the sacrifice they would pay with their lives in the service of our country.  The 19 year old Marine killed by an IED, or the 30 year old helicopter pilot whose helicopter was shot down trying to rescue a pinned down unit, or even the 22 year old who was killed while on a rescue mission to save a stranded pilot.  The latest is a 32 year old Army specialist who was serving in Afghanistan, who leaves behind a wife and a daughter.  When you stop and think about it, the cost of hunting this one man, the human cost this one man inflicted on our country alone has been staggering, however, this man had to be hunted down to stop the senseless bloodshed he has caused our country for over 20 years.
I never liked celebrating a death - any death.  Life is too precious to be discarded like yesterdays newspaper.  While I am not opposed to capital punishment (as in the case of Jeffrey Dahmer) the scenes that played out last night reminded me that our children have suffered, have watched friends go to war, have lived with the words "terror" and "Jihad" in a time when they should have been more concerned about the prom, or college, or just living their lives "in the timeless pursuit of happiness". They should have been allowed to find the happiness that I enjoyed even as I left military service to start a life as a husband and father.  While I watched those kids come out into the streets, I realized that maybe we should give thanks to all those military men and women who serve this country to defend us all against all enemies both foreign and domestic.  To those "kids" who have grown into adulthood and have put their lives on the line so that we all may be free of terror.  And to their families who have suffered and toiled in the hopes that their loved one would return home safe.
God Bless our military! 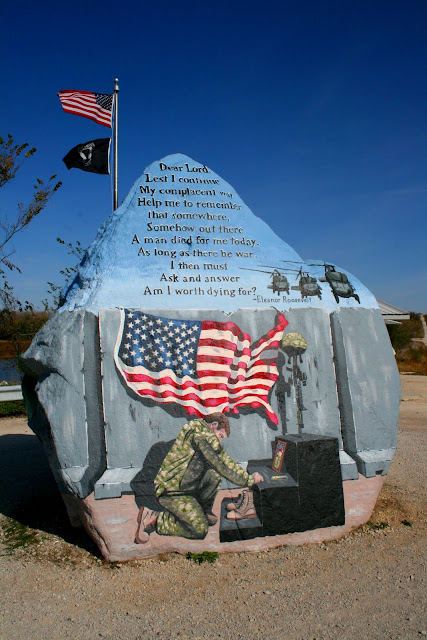