It is now March, and the weather, thankfully, is starting to warm.  Slightly.  Slightly warm, in Iowa, however, doesnt really mean much.  For several weeks we suffered thru sub zero temperatures, snow, ice, more sub zero, and hardly any sunlight at all.  Being somewhat scientific in my approach, I was always under the impression that life as we know it, at least here on the surface of earth, must have some sort of sunlight.  From the plants and trees to the animal kingdom, sunlight feeds us, makes us more mentally and emotionally balanced, adds a glow to our skin, and helps to generate plant life.  But (and you always know there is a but looming somewhere!) without sunlight, moods around at least our house are, for the most part, pretty down.  That is, fortunately until this week, when the sun finally started peeking through the clouds, the temperatures finally started picking up (a little) and the deep snow cover that has blanketed our town is finally starting to melt.  Some.


As with all things, there is a down side even to the warmer changes of spring.  With all of the snow cover we have had, it is almost a certainty we will have more spring flooding, and after the Flood of 2008, the chances are good we could see a similar event unfold.  Climatologists are predicting above normal precipitation this spring, and added to the melting snow could mean more problems.  Luckily our house sits on a hill far away from the Cedar River, and although nothing can be ruled out, our house sits in a much more "elevated" position than where we lived previously.  Let us all hope that these predictions are not accurate and we can avoid another flooding even such as what occurred in 2008.

As the temperatures have begun to warm, I have been making repairs to my Harley.  Since I am not as uniquely familiar with a Harley, I am trying to take it rather slow, choosing the repairs I can do myself first, and asking a lot of questions in the process.  I did change the slip on mufflers myself, and a few other minor repairs from last year.  I chose a muffler that would be more of a performance boost, selecting the Rush Racing slip ons.  These are not exactly the best solution in the world, but they do boost the output of the engine by about 4-5 horsepower.  They look great on the bike, but the sound is what struck me.  They sound more throaty and maybe just a bit crisper.  Still have to figure out tires and brakes, but just having fun is the main key here. 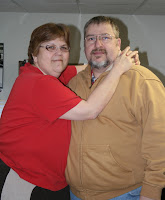 Work has been challenging, however, Mary finally received a promotion and a little pay raise which should help offset the loss of income I have had.  Her schedule is not what I would call family friendly but its something that she may benefit from having a split work week rather than a full forty hour week at once.  As for me, my night long endless design work seems to be slowing up a bit, allowing for some time to catch up on housework and organizing the office.  This year looks to be a slower year than most, but my day job looks to be accelerating some.  Several staff members at my D.O.T. office are reviewing their options for early retirement, and this year we may lose some of them.

About a month ago, as Mary and I made our way one Saturday morning to our favorite breakfast diner, a heavy fog in the area had caused "hoarfrost" to cling to the trees in the area.  Hoarfrost is the result of a heavy morning dew freezing or clinging to the trees, creating a thing white frost on anything it touches.  It makes the trees quite beatiful, especially after such a mind numbing winter, but this one particular morning the sun was just peeking thru as we returned home, and then hid again as if playing hide and go seek thru the shadows.  Unfortunately hoarfrost can also be somewhat dangerous, making for a rather slippery road surface as we discovered at the railroad crossing just east of the house.  It served as a reminder that winter could not last forever, but it still held us in its raw clutches.
This past Saturday I finally made it out for the first ride of the season, putting almost 100 miles in on a somewhat chilly, but sunny 43 degree afternoon.  There is absolutely nothing more exhilirating than riding a motorcycle in 40 degrees.  Some might use other terms such as "crazy" or lunatic" but no matter, to me it is just the best sign that winter is leaving and spring is almost here!  I took the opportunity to ride up to J&P Cycles about 40 miles northeast on Highway 151.  This time of year there is still a lot of sand, grit, and salt literally covering the roadway.  A skilled rider would recognize that riding can be a bit treacherous if you are not careful, as was the rider I rode past who was picking his bike and himself up from a spill.  No doubt tried to take a corner much to fast and hit a sandy patch.  Every choice including what part of your lane to ride in can have its consequences, so to those who may be trying to make their way out onto the roadways this time of year - be careful!
There was a moment which served as a rather emotional and uplifting experience on my ride Saturday.  It was one of those moments you wish you had a camera, but for now I will simply play that moment over and over in my mind.  Most of my riding "adventures" are filled with observations of the world around me.  The deer that were grazing amidst the snowy drifts, or the wild turkeys in their cautious pace thru a bare patch of cornfield.  I was only 7 or so miles east of town, and I could see what appeared to be a hawk taking off from his kingly stance, but as he took off, he turned towards me, wings beating the cold air with certain destiny.  Normally in this area red tail hawks are the most common bird of prey, along with barn owls.  For some reason, however, I could not take my eyes off this bird, in part because he was flying much lower than most birds who fly across the divided highways of Iowa, and as I rode ever closer, the bird, indeed, was not a hawk at all, but as the sun gazed upon this bird, the hawk revealed itself as a bald eagle, flying not 50 feet over my Harley as I rode easterly!  It was a moment I will not soon forget, and to me, it was a sign from above that I had an angel keeping watch over my ride.

"But those who wait upon the Lord shall renew their strength, they shall mount up, with wings as eagles, they shall run and not be weary, they shall wallk and not faint".    Isaiah 40:31
For that 100 miles on a chilly day in March, my spirit was indeed renewed.
God Bless !
Posted by boomer64 at 7:59 PM No comments: